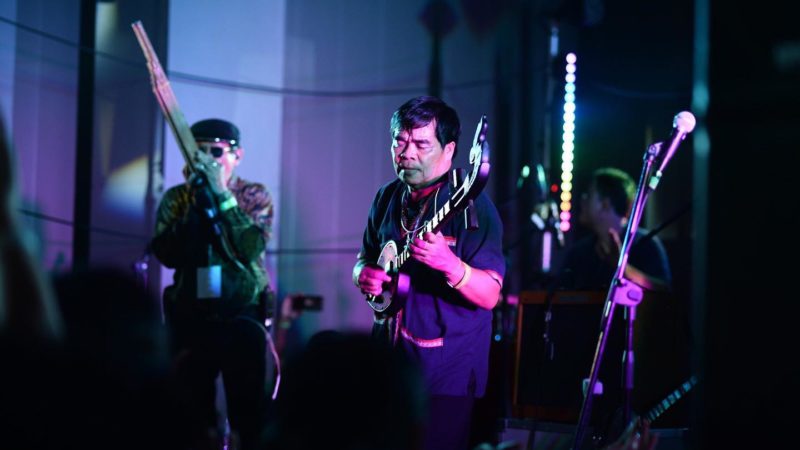 DJing in Asia: Don’t play too many Asian songs

Vintage Thai funk, Malay disco and Indonesian boogie are treasured by international crate-diggers. But DJs around Southeast Asia can get complaints when playing these styles at home. By Nyshka Chandran.

Thailand’s folk music has travelled far from its countryside roots. Over the past decade, genres such as luk thung and molam have grown hugely popular in underground music culture as reissue projects such as Soundway Records’ seminal Sounds of Siam compilations become collector’s items. High-profile collaborations between international headliners and molam acts have also boosted the star power of Thai folk—in 2018, Four Tet and DJ Nu-Mark played in Bangkok with legendary molam performers Angkanang Kunchai and Kwanjit Sriprachan.

For most funk aficionados, the dynamic tempos of luk thung and molam wield undeniable power on dance floors. But it’s a different story in pre-pandemic Bangkok. “If I were to play that music in a commercial lounge, people might stop dancing,” said Pan Uttaburanont, a DJ affiliated with Olympic Diggers, a crew of wax collectors and hi-fi enthusiasts based in the Thai capital. Speaking to me before COVID-19 derailed local nightlife, she described how “a surprising amount of Bangkok’s population still look down on luk thung and molam because they aren’t considered modern.”

“In Thailand, people have always looked up to Western music,” explained Maft Sai, a Thai DJ, record label boss, venue owner and cofounder of the Paradise Bangkok Molam International Band. In 2009, he launched a party series called Paradise Bangkok (not to be confused with his band of the same name) that focused on tunes from Thailand, the Middle East and beyond. Maft, real name Nattapon Siangsukon, remembers many locals at that time asking why he promoted northern Thai sounds, which they referred to as “taxi driver” music.

Similar sentiments reverberate around Southeast Asia. Back when parties were a weekly routine, several DJs told me of the backlash they faced from crowds and venues when playing older cuts of indigenous dance music. Malaysian DJ Kingston, part of the Ze Arcade Paint collective, described a 2017 New Year’s Eve party at a fashionable bar in Penang. “The place knows I spin funk and soul, so after playing some American boogie I went into Japanese ‘city pop’ and then dropped a few Malaysian tracks, specifically Quinary M’s “Kebebasan” [a cover of Chic’s “Le Freak”] and Uji Rashid’s “Sani” [a cover of Boney M’s “Sunny”]. The songs immediately cleared the dance floor. I even heard people say, ‘What the fuck is that guy playing?’ Then after my set, the bar manager warned me not to play too many obscure Asian edits.”

Hong Kong-based DJ Arun R, who is also Mixmag Asia’s business and creative director, recounted an experience in 2019. He was playing a regular gig at a suave speakeasy where he usually drops disco edits and Afro-Latin grooves. “The staff are mostly Nepalese, and one evening I decided to play Todh Teri’s groovy remix of Bappi Lahiri’s “Come Closer,” a Bollywood classic,” he said. “Two staff members immediately approached me and said the space doesn’t do Bollywood music. But really, it shouldn’t matter which part of the world music comes from. Disco is disco. It is its own language.”

Singaporean Nikhil Ramakrishnan, who produces footwork and juke tracks as Iyer, recalled an incident at a local club in 2014, where he ended a DJ set with Kit Chan’s “Home,” a classic song associated with Singapore’s National Day. Iyer vividly remembers the negative reaction from his peers: “That track definitely wasn’t well received. My friends told me I was out of touch, but playing that song was simply a way for me to connect with my hometown.”

These stories are unsettling, although they don’t necessarily indicate a regional trend against local rhythms. Artists in the Philippines and Vietnam, for example, pointed out that traditional tunes are usually warmly received. According to Jakarta-based Aditya Permana, former music director at hospitality and entertainment company Syah Establishments, local music became part of club culture in recent years. Pre-pandemic, “Folk genres such as dangdut were played at events and festivals,” he said, “with the selector sometimes also collaborating with Indonesian singers.”

Ultimately, it all depends on the venue. Alternative music, by definition, appeals to niche audiences and is only accepted in certain bars and clubs. Across both developing and developed Asian cities, the number of open-minded spaces have steadily risen in recent years and it’s primarily commercial locales that placed restrictions on the type of music played. “Some superclubs in Jakarta prevent DJs from playing Indonesian tunes, but that’s usually only on the weekends,” said Permana. Pre-pandemic, he managed three locations that had certain rules for DJs but noted that “regulations are constantly changing to keep up with trends.” For example, The Moon at Hotel Monopoli started as a poolside bar playing house music, but it later shifted to R&B and dance-pop, he said.

“There is undoubtedly a desire for modernity in this part of the world, but I don’t think that desire is especially different from other places,” explained Benjamin Tausig, an assistant professor of ethnomusicology at Stony Brook University in New York. Tausig’s speciality is researching the intersection of sonic media and political dissent in Southeast Asia and North America. “Often the incorporation of foreign elements in many Asian countries is not a matter of them giving up on local culture, but of them transforming foreign products and ideas to suit their own ends,” Tausig said. “For example, molam is now extremely modern, in the sense that it uses studio technology, big stage shows and creates YouTube stars.” His argument is that if customers at a Kuala Lumpur bar want to hear popular international music, that doesn’t reflect a dislike for Malaysian music, but rather indicates how global trends, such as K-pop, have unified cross-border tastes.

Phnom Penh-based musician Julien Poulson, of the internationally acclaimed band The Cambodian Space Project, echoed that sentiment. Speaking about gigs pre-COVID, he noted how shows in the Cambodian capital were “typical of what you’d find in any city around Southeast Asia, which means crowd-pleaser reggae, cover bands, and a bit of blues and jazz.”

He observed that “there seems to be less interest in local music and consequently not enough exploration of all the wild, weird, ethnic sounds that are part of the cultural roots of the region.” It’s “very hard to pull an audience for this type of music, despite its cultural importance,” he added. “These kinds of events just aren’t popular amongst locals, who are more likely to see this style of music at weddings or ceremonies but aren’t so inclined to attend gigs.”

Slowly, the narrative is shifting, as vintage and contemporary music from around the region gains global acclaim. DJs, producers and audiophiles in the West also have easier access to Thai funk, Malay disco and Indonesian boogie from bygone eras, with many of these rarities now available on streaming platforms. As a new generation of global listeners discover the diverse range of Asia’s sonic palette, vinyl demand has soared. Albums from the 1960s to the 1980s now command hefty price tags—in 2019, Indian composer Charanjit Singh’s seminal 1983 work Synthesizing: Ten Ragas To A Disco Beat sold for nearly $1,700 USD on Discogs.

“Europeans are really noticing original Southeast Asian music, and that has increased the value of our musical history, making it trendy,” said Olympic Diggers’ Pan. She pointed out how Bangkok is now home to diverse venues such as Cassette Music Bar, which focuses exclusively on ‘90s Thai music.

According to Maft Sai, the number of locals at his parties has gradually increased over recent years, especially now that his band tours internationally. “Across Southeast Asia, the general public seem to only follow a trend once it gets the stamp of approval from other countries,” he said with a wry smile.

Going forward, the pandemic could be the catalyst for broad social change. With nightlife around the region still mostly closed and many people pining for the dancefloor’s healing energies, there’s a chance the general public could be more embracing of indigenous sounds once parties fully restart. Time will tell.