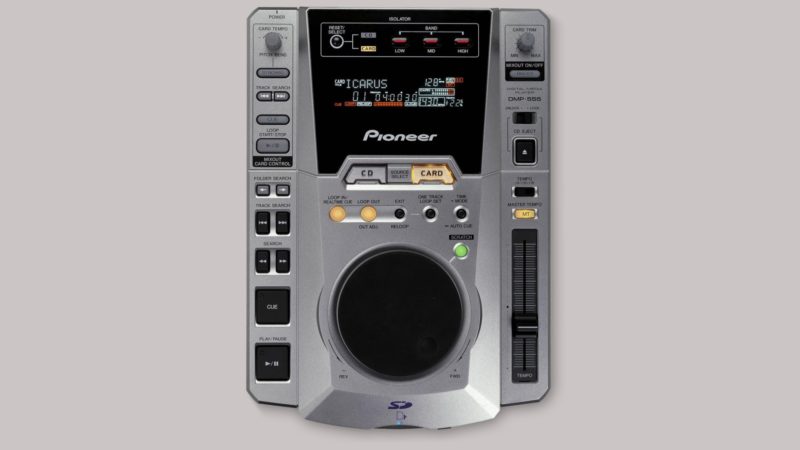 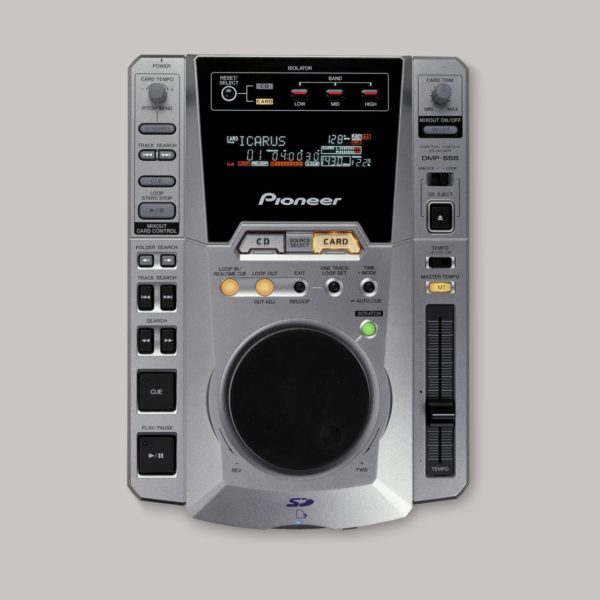 As it reaches its 20th anniversary, we look back on the DMP-555, the weird and wonderful DJ player that never found success in its day.

A few months ago, I had a mix on 20-year-old DJ gear to see how things have changed in the booth. The process revealed plenty about how the march of technology shapes the way we DJ. It also showed how much people still love their old equipment. The CDJ-100S, used as part of my experiment, got a particularly adoring response, with people on Pioneer DJ’s Instagram saying things like:

“Awesome decks.” “The best players ever.” “I miss them.” “These were epic back in the day!”

The CDJ-100S was on the market for around ten years, making it the longest-selling CDJ of all-time. So it would be safe to assume that the player that came after the CDJ-100S—one that retained the same basic design but massively improved its technology—was also longstanding and much-loved by the DJ community? Well, actually, no. 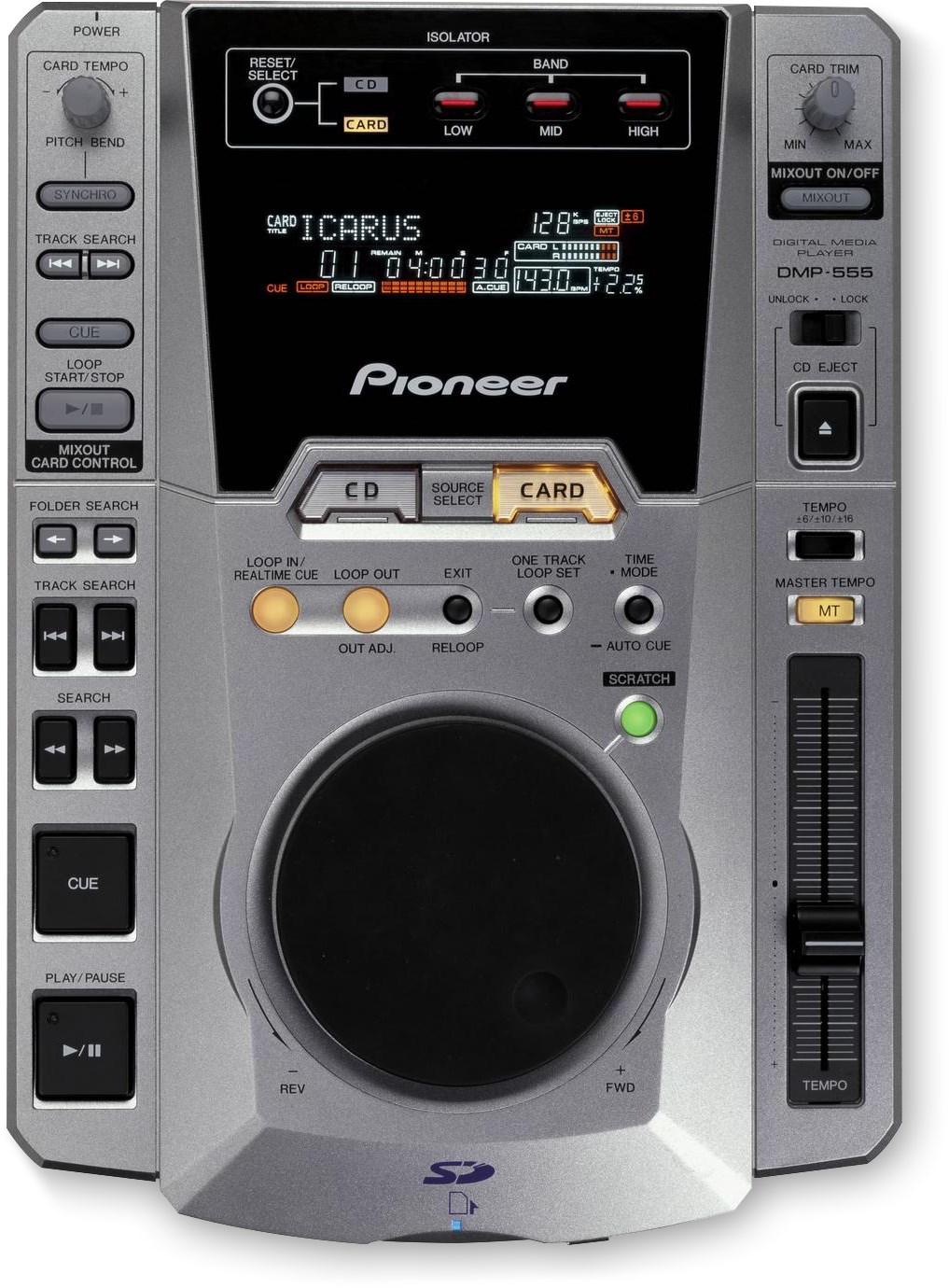 Released in November of 2002, the DMP-555 arrived a year after the CDJ-1000, the precursor to the industry standard media player we know today as the CDJ-3000. It was the first—and would remain the only—DJ deck with the product code DMP, which stood for Digital Media Player. It can be difficult to grasp this retrospectively, as its features are now so commonplace, but the technology on the DMP-555 was mind-blowing for the time. We might even say that it’s the most futuristic product Pioneer DJ has released.

“Around the year 2000, we were simultaneously pursuing three goals,” said Kou Atsumi, a Pioneer DJ product planner. “One: the evolution of current products—the CDJ-1000. Two: the development of leading products, like the DMP-555. And three: challenge in the video field, with the DVJ-X1… The DMP-555 was positioned as an advanced development product, and there seemed to be a momentum to create a market rather than competing in an existing market.”

The DMP-555 could play music from an SD card, and it was the first Pioneer DJ player compatible with MP3, both huge advances for the time. Back in 2002, digital music was being hailed as the next big thing. Peer-to-peer file sharing services like Napster had exploded in popularity, raising complicated questions about copyright and the future of music sales. In 2001, Apple released both iTunes and its first iPod, as more and more people discovered the possibilities of MP3. There was a feeling within Pioneer DJ that digital formats were the future of DJing.

By modelling the DMP-555 on the familiar design of the CDJ-100S, Pioneer hoped that the new SD card functionality wouldn’t seem too alien to DJs. Although vinyl was still king among most professionals, the use of an additional CD player for new or exclusive music was becoming more popular. For DJs who played smaller venues and events, CD players, like the CDJ-100S, were usually the go-to. In other words, digital DJing was far from a niche concern.

However, DJs would also need to wrap their heads around the fact that the DMP-555 had two outputs, which meant you could play music from a CD and an SD card at the same time. To put the novelty of this in context, it’s a function that’s never been repeated on a Pioneer DJ player since. Not only that, a sync button—the first-ever on a Pioneer DJ product—would match the BPM of the two outputs. Tracks from the SD card could be looped and then synced with the track playing from the CD.

“On release I was amazed by the tech involved,” said Pioneer DJ and DJ Resource‘s Jeroen Groenendijk, a business development manager who introduced the DMP-555 to DJs in the Netherlands.

Jeroen was also responsible for showing them Pioneer’s first-ever DJ software. SVJ-DL01 came bundled with the unit, released a full eight years before Rekordbox would hit the market and eventually become a flagship product.

“The software offered a way for DJs to organise their music, rip music from CDs and it could be used as DJ software,” Groenendijk told me. “In that respect, this was the forerunner of Rekordbox Performance mode.” 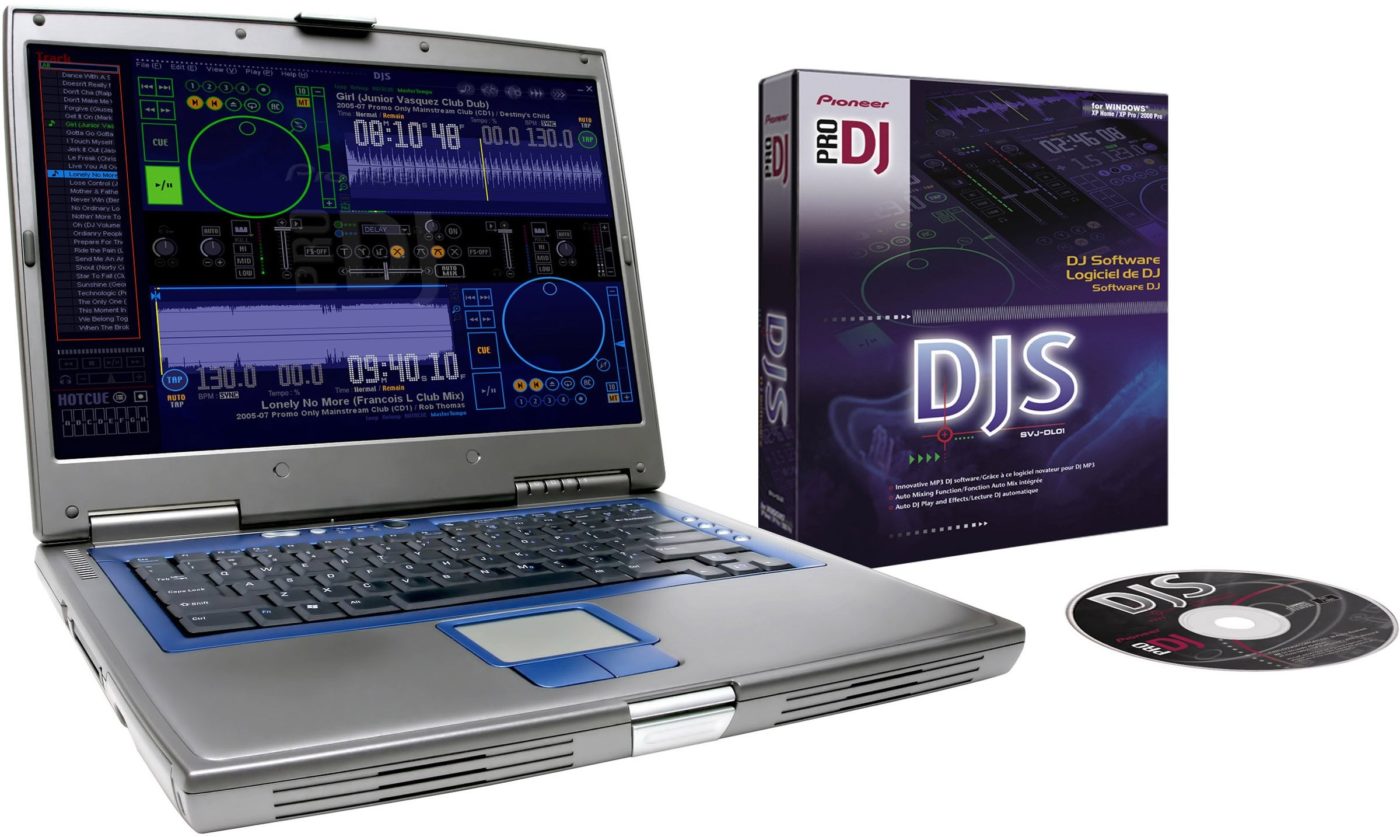 The DMP-555 wasn’t done there, though. It also had three-band total kill isolators, which removed the lows, mids or highs from a track at the push of a button. It had a scratch mode on the jog wheel for emulating vinyl manipulation, like the flagship CDJ-1000, while also incorporating key features from that unit, like Loop In and Out buttons and variable pitch ranges. As a bonus it had a compact design and looked slick.

“I’d heard of [the DMP-555] in the past,” the Australian DJ Adam Chesters wrote in a blog post on the history of the CDJ, “although 95% of my DJ colleagues swore it was a fake… This deck was so far ahead of its time that I reckon some back-to-the-future shit was going on when they came up with it.”

The story of the DMP-555 is actually a bit like the guitar solo scene at the end of Back to the Future. In 1955, the time-travelling lead character, Marty McFly, rocks a school dance with a rendition of the future smash “Johnny B. Goode”—only to lose himself in an outrageous guitar solo that kills the party. “I guess you guys aren’t ready for that yet,” he says.

Jeroen Groenendijk remembers DJs’ early reactions to the unit. “There were no DJs already using SD cards as media, nor did most of them really understand how that would work,” he said. “So with the DMP-555 we had to educate DJs that SD would be the media for the future. Only a few would believe me.”

The software required a further leap of faith. In 2002, programmes like Traktor DJ Studio 1 were on the market, but DJing with software was hardly a mainstream concept. “Artists tried the software, but just like with the SD card, the tech was years ahead of what the users were used to, so it got picked up by very few people.”

Jeroen added that, “The software was not working smoothly. This might have been because computers in those days, and especially laptops, were not nearly as powerful as today, so most laptops struggled in running the software smoothly.”

“At that time, most people thought that MP3 was not suitable for DJing because the sound quality was not good enough,” said Kazuo Ishikawa of Pioneer DJ’s hardware design department. “Also the big jog wheel was what DJs had been waiting for, so the CDJ-1000 had too big an impact for the DMP-555 to stand out at all.” The history of DJ technology has shown us that things tend to move gradually. Major developments like CDs, MP3, DJ software, laptops and USBs each took years to fully take hold. Club culture has often been seen as future-facing. But in some ways, it makes sense that DJs and clubs are cautious in adopting new ways of playing.

For starters, ensuring technological stability is a top priority. The price of any kind of breakdown in the DJ booth immediately stares you in the face: a room full of unhappy people. DJs are also understandably hesitant to move away from tried-and-tested methods. Even outdated ways of working have the advantage of familiarity and muscle memory.

The broader context is that DJs exist in an interplay between what they want and what the current infrastructure of clubs will provide. In other words, it’s no use being ahead of the technological curve if the venues you play don’t support or understand your chosen format or gear. (Laptop DJs in the mid-2000s, who had myriad stability and connectivity issues, are a case in point here.)

The DMP-555 was the shortest-ever run for a Pioneer DJ product, lasting one year and eight months. SD card and MP3 compatibility wouldn’t reemerge until the CDJ-1000 MK3 in 2006. It would take until 2009 for Pioneer DJ to launch Rekordbox, its next DJ software.

“I think the DMP-555 was proof that technological development in the DJ industry needs to go in small steps,” said Jeroen. “This is the lesson Pioneer learned from the DMP-555 and has implemented in future development.”

With the market having reached maturity, and the attitudes and needs of DJs much better understood, is it possible we’ll never see a product as risky—or potentially disruptive—hit the shelves again?

“I am sure that the designers of the DMP-555 are quite satisfied with the state-of-the-art technology and quality of the product,” said Kazuo Ishikawa. “It is amazing that the DJ functions that we take for granted today were developed 20 years ago.”

You’ll need to speak Hungarian to get the most out of this detailed run-down video, but this is currently the best up-close footage of the DMP-555 available anywhere.